Warning: Use of undefined constant ‘WP_DEBUG_DISPLAY’ - assumed '‘WP_DEBUG_DISPLAY’' (this will throw an Error in a future version of PHP) in /home/customer/www/toriaandco.com/public_html/wp-config.php on line 77
 Na Pali Coast, Kauai - TORIA & CO 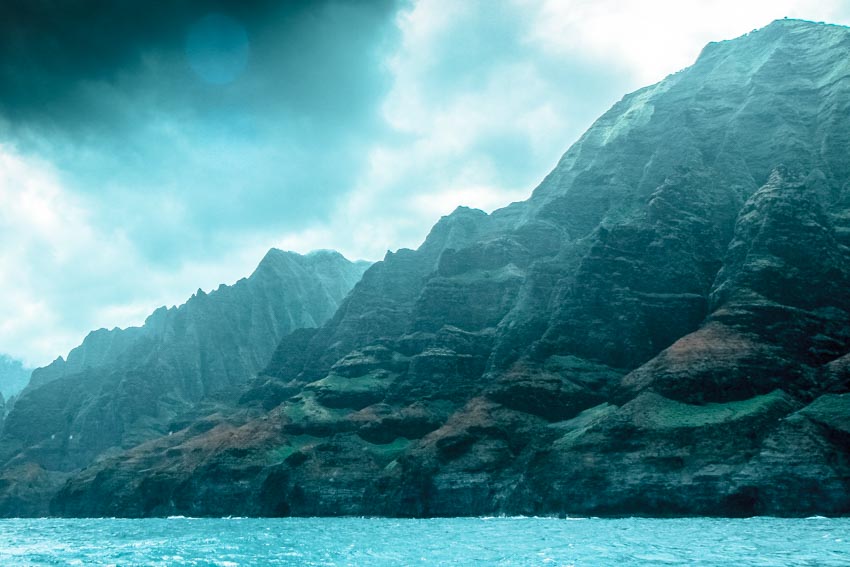 When choosing which Hawaiian island to spend 4 days of solo R&R on, there were two distinctive front-runners for me. Oahu sounded too busy and Maui sounded like a romantic place that I’d like to save until a time that my partner can come along with me. And so I was torn between Hawaii (the Big Island), with all its volcanic activity, and Kauai, to see the iconic Na Pali Coast.

Kauai won out, and the Na Pali Coast did not disappoint.

The Na Pali Coast State Wilderness Park on the north-west side of Kauai Island, Hawaii, is a 27km stretch of coastline with a breathtaking landscape. The famous shoreline, starring in movies such as Jurassic Park and King Kong, features miles of mountainous lush-green pinnacles meeting the ocean.

Towering Pali (sea cliffs) – which reminded me of the lower jaw of a great white shark or the gothic towers of a grand cathedral – are interwoven with narrow valleys and cascading waterfalls, creating a dramatic backdrop of rugged terrain on the north pacific ocean.

There are multiple options for exploring the region, depending on your budget and/or fitness level. The only land access involves a strenuous and, at times, very treacherous 17km hike along the Kalalau Trail. If you’re up for the physical exertion but don’t want to spend more than a day, you can also join a sea-kayak tour, where you’ll kayak along the stretch of coastline and back and stop off at little inlets of beaches along the way.

If you’re an avid photographer, time poor or just have money to burn, do the helicopter tour. You will see parts of the wilderness park that are not accessible by any other means and, humming along to the famous soundtrack, you can pretend you’re flying into Jurassic Park itself so keep an eye out for dinosaurs!

I went for probably the easiest option… a half day boat trip up and down the coast. There was maybe 20 – 30 of us on the boat, plus our laid back, knowledgeable and fun crew. We ate a fresh buffet lunch, listened to a great soundtrack of upbeat island music, and drank punch under the baking sun. On many occasions, dolphins joined us along our journey, conducting back-flips and spinning acrobatics – much to our entertainment. On the day that I did it, as we turned and sailed north along the coast we were met by some very rough waves. With a mouth full of sea salt, burnt toes from where I’d forgotten to apply sunscreen, and wrapping my sarong over my camera lens to keep it dry, I was still in my element though.

The beauty of the landscape was other-worldly and, even though I was surrounded by a bunch of other tourists, my soul felt completely alone in quiet reflection as I looked on at that wild scenery. The idea that this Jurassic landscape remains untouched and unchanged from the time of the Hawaiian settlements who flourished here centuries ago… it’s spine-tingling and incredibly humbling.

There are many tour operators offering trips to the Na Pali Coast. I talked through my options with the concierge in my hotel – Marriott’s Kaua’i Beach Club – and they booked it all in for me. If you don’t have your own car to get around the island, ensure concierge book you taxi’s to / from the docks as well.