Warning: Use of undefined constant ‘WP_DEBUG_DISPLAY’ - assumed '‘WP_DEBUG_DISPLAY’' (this will throw an Error in a future version of PHP) in /home/customer/www/toriaandco.com/public_html/wp-config.php on line 77
 Kaua'i Marriott Resort, Hawaii - TORIA & CO 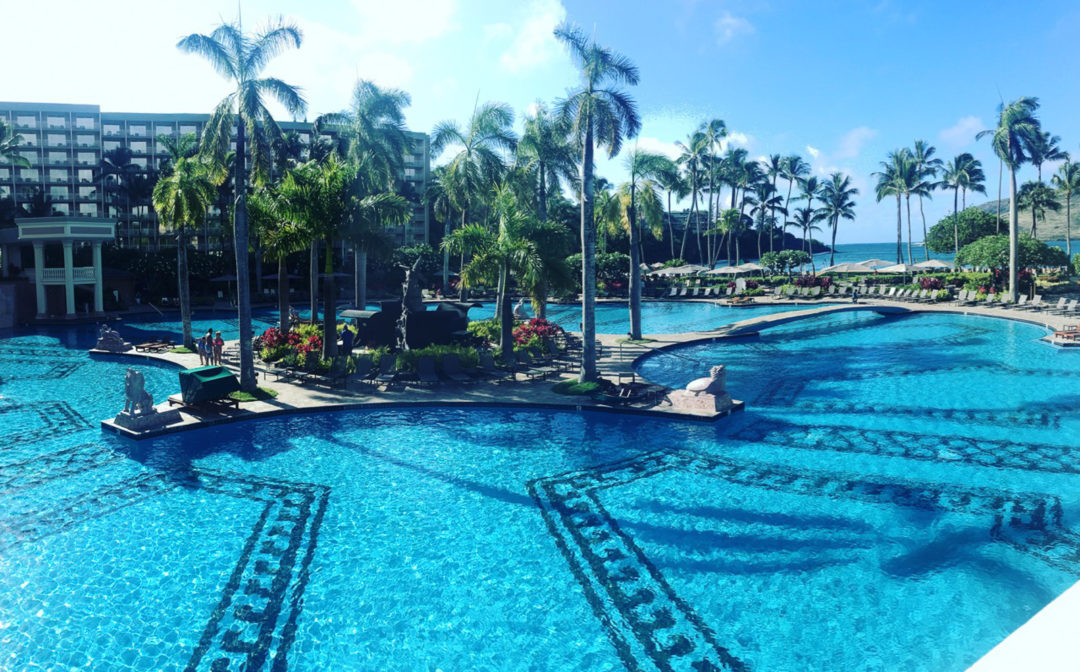 “Sometimes you just need to disconnect and enjoy your own company.”

After a wonderful itinerary traveling New Hampshire, New York and California with family, I was looking for a little “me time” before returning home and back to my day job. Hawaii was calling to me, and I was lucky enough to land 4 blissful nights at Kauai Marriott Resort.

Honolulu airport on the island of Oahu is Hawaii’s international hub. Six hours direct from Los Angeles, seven and a half from Tokyo, and ten hours from Sydney, I flew Virgin America in First Class from Los Angeles to Honolulu and Qantas Economy from Honolulu to Sydney.

Hawaiian Airlines are the go-to domestic airline to for island-hopping. I changed at Honolulu and flew straight to Lihue airport on the island of Kauai, north-west of Oahu.

Exiting the quaint little airport, I asked a desk clerk where the hotel airport shuttles departed from. She directed me to a classic old skool payphone mounted to the wall with a plaque containing the speed dials of all major hotel resorts in the area. Lifting the receiver, I punched in the code for my hotel and a friendly voice at the end of the phone informed me that a shuttle would be on it’s way to collect me immediately. Kauai Marriott Resort is just a short few minutes drive from the airport in the minivan shuttle bus.

I stayed in a King Room with an Ocean View and private Balcony on one of the upper levels. The room was basic, but very clean and stylish enough – I really had no complaints. The ample-sized balcony overlooked the hotel gardens, the pool and the beach, providing a stunning view to wake up to in the mornings!

With three slipped discs in my lower back, the quality of the mattress has become a huge thing for me in recent years. No longer can I make do with any old place to lay my head, as if the mattress is a rock then I will wake up in crippling pain in the morning, which takes me the entire day to get over. I’m happy to advise that the bed was comfortable and there were no issues with stiffness during my stay!

The resort facilities were really very impressive at the Kauai Marriott Resort. There was a large souvenir and grocery store in the complex where I bought munchies and alcohol for my room, as well as an Art Gallery, concierge and travel agents to help you book island tours, activities and arrange car hires. There were BBQ facilities behind the pool for if you wanted to cook your own lunch or dinner, on top of a variety of resort dining and drinking options. There were also beautiful coy-carp gardens to wonder around, and of course that jaw-dropping pool at the centre of it all!

In front of the enormous and highly-maintained pool were manicured lawns reaching over onto the pristine and secluded Kalapaki beach, offering a variety of beach activities such as volleyball and kayaking. Situated in a sheltered bay, with jagged Hawaiian mountains across the other side, the big cruise ships were visible offshore as they came through the middle of the bay to dock and depart the island.

There was also a spa onsite which I did end up frequenting for after-sun treatments, especially after a particularly long day in the sun. My back, neck and arms were gently covered with natural aloe vera to cool and soothe, and I was wrapped in huge banana leaves to allow the aloe vera to soak into my skin. The treatment was reasonably quick and cheap, and was very therapeutic after a day in the harsh sun.

The poolside cafe, Aupaka Terrace, served casual American food all day, and was also the location for the daily hotel breakfast.

I dined at Cafe Portofino and Duke’s Bar & Restaurant. Both of which served delicious and hearty meals with a great drinks menu to match.

There are also a number of great dining options within a short walking distance from the resort.

When in the resort, I mainly spent my evenings in Duke’s drinking cocktails out of a pineapple shell at the bar. There was pumping live music and the atmosphere was buzzy and electric. As a solo traveller, I found it to be the easiest place to make conversation with other guests, locals and the bar staff.

I also liked to sit on the beach after dark listening to the waves and enjoying the fresh air without the harsh sun to boot. The hotel lit tiki torches all over the resort at night, which I thought was a really nice touch considering our locale.

My plan for Kauai was simple. I wanted to see the Na Pali Coast, and I wanted to lay poolside with my kindle and cocktails for the remaining days. As such, I didn’t get to explore much of the rest of the island, though it is definitely a place I would like to return to in the future.

The Kauai Marriott Beach Club felt very American… in the sense that the furniture and fittings were roomy and “classically” chosen to suit a Hawaiian resort, the place felt larger-than-life and the food was constant and fulfilling. It was exactly how I had imagined a Hawaiian resort after watching blockbuster movies that were set in Hawaii, like ‘Forgetting Sarah Marshall’.

I thoroughly enjoyed my stay in this resort, and I would definitely recommend it to families and large groups travelling together. Whilst I was still extremely happy as a solo traveller, I just feel that the resort would have been even more impressive to me had I been in a big social group.

As for the island of Kauai in general… it had me at Aloha. Wandering through Ancient Egypt in Cairo

A Backpacker’s Weekend in Dublin